Switch to the light mode that's kinder on your eyes at day time.

Switch to the dark mode that's kinder on your eyes at night time.

Switch to the light mode that's kinder on your eyes at day time.

Switch to the dark mode that's kinder on your eyes at night time.

Among these biographies, readers will find heroes, role models, and everyday women who did extraordinary things — bold women whose actions and beliefs contributed to making the world better for generations of girls and women to come. Whether they are putting pen to paper, soaring through the air, or speaking up for the rights of others, the women profiled in these pages were all taking a stand against a world that didn’t always accept them.  (Summary from back of book – Image from barnesandnoble.com)

My Review:  Little Leaders: Bold Women in Black History is a thing of beauty.  In a series of mini-biographies, it tells the stories of bold black women throughout history who persisted in the face of adversity, broke down barriers, and became pioneers in new fields of study and exploration.  They were activists, writers, abolitionists, poets, athletes, teachers, generals, scientists, engineers, musicians,  artists, astronauts, doctors, political leaders, spies, pilots, journalists, and so much more.  These women are fiercely driven and staunch advocates for equal rights.  Harrison wrote these stories hoping to inspire girls of all ethnicities, but also states:

“I think about what kind of dreams I might have had if I had known about all these women when I was growing up, if I’d known that so many people who looked like me had done such incredible things.  To be able to see yourself in someone else’s story can be life changing.  To know that a goal is achievable can be empowering.  I hope that anyone who reads these biographies — whether or not they look like these Little Leaders — is inspired to go after the things they are passionate about.”

The book itself is well-organized, easy to read, and presented in a format that is appealing for most ages and reading levels.  It seems impossible to consolidate a lifetime down to a few simple paragraphs, but the author crafted engaging summaries that conveyed both meaning and depth without dissembling. And the illustrations? In terms of sheer aesthetic appeal…the illustrations are everything.

I absolutely adore the author’s illustrative style, which is remarkable, minimalist, and oh-so-visually appealing.   As you can see in the illustrations I’ve shared throughout this post, Harrison uses the same basic shape and facial expressions for each historical figure with few exceptions, but alters the hair, complexion, clothing, accessories, background, and occasionally make-up, to fit each individual figure, creating a surprisingly recognizable representation of her real-life subjects.  It was so interesting to conduct a little outside-the-book research on each person and see how the author incorporated some of their more iconic looks and interests into the design.  I could tell that Harrison had spent a great deal of time pouring over their photographs to find ways to represent each woman as an individual.   In regards to her style choice, Harrison says:

“I originally envisioned them as little girls serving as stand-ins for these famous women — that’s why they’re “little” — but as I’ve started sending them out in to the world, they’ve become bigger than I imagined.  I designed them to be interchangeable because I want you, the reader, to see yourself in any one of them, and to feel their strength and possibility in you.” 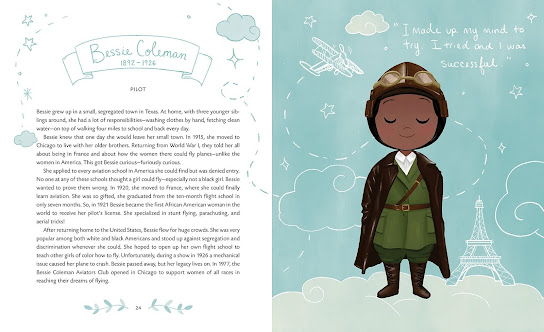 I know this book was meant for younger readers than myself, but I learned so much from it.  In fact, I learned so much it actually makes me sad.  I only knew the stories of nine of these women and although I recognized a few others, by and large, I had never even heard of the rest, let alone knew of their contributions to the world.  That is not okay.   We can do better.   That leads me to one of my favorite aspects of this book — how it lights a fire inside the reader to learn more.  As I read, I was often inspired to dig deeper into the stories, as I thought about other things I wanted to know:  Were they married?  Did they have kids?  How were they raised?  Who were their mothers?  And in some cases, where are they now? 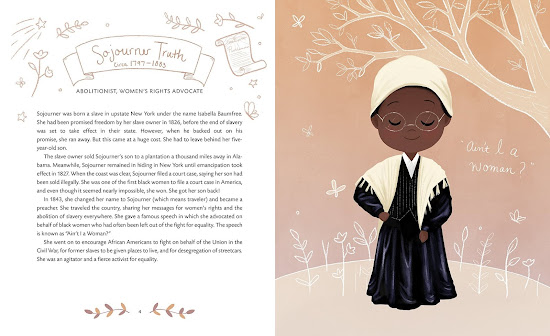 For example, in this book I learned that when 6-year-old Ruby Bridges and her mother were escorted past crowds of protestors to integrate an all-white school in New Orleans, Ruby had no idea that all the loud people with signs were protesting her?!  She thought it was Mardi Gras.  You can bet her mother knew, though, as she walked her baby past the angry mob.  What must that have been like?!  Hearing Ruby’s story, made me want to know her mothers’ story too.  So, I looked her up online and read her story.  Now, I know her name.  Ruby’s mother was named Lucille.  She never had the opportunity to finish elementary school and that was why she fought so hard for Ruby’s education.  She didn’t just walk her to school on the first day.  She walked her to school every day. Sadly, she died just a few months ago.  Now, I know a piece of her story.  Of course, that is exactly what Harrison hoped for when she created Little Leaders. In her words:

“This collection includes only a handful of the countless bold black women who have done extraordinary things and lived incredible lives.  With these mini-biographies, I hope to spark your interest and encourage you to find out more about them and the women who have followed in their footsteps.“ 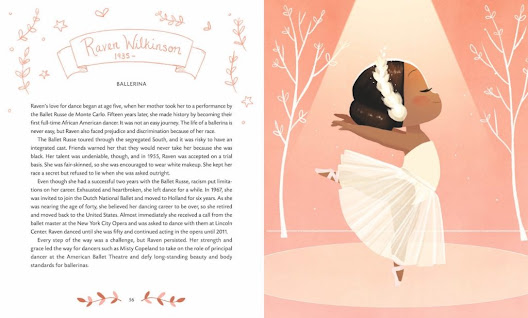 What I loved most about Little Leaders: Bold Women in Black History, aside from its acknowledgement of black female achievements, is how it made me feel.  Each story was a source of personal inspiration, encouragement, and strength — a subtle pep talk and a compelling reminder of what women and, specifically, black women can do when they relentlessly pursue their passions. Along with the 40 mini-bios, Harrison also includes 12 other notable names in black history, their illustrations, accomplishments, and a list of recommended resources for those who would like to take a deeper dive.

If you can’t tell, I am sort of obsessed with this book.  I read much of it sitting in front of my computer, alternating between reading the book and googling to my hearts content online and would often snag a passing kid or my husband to regale them with historical facts.  We all learned a ton.  If you are a woman or young girl and want to come away from a book feeling like you can do pretty much anything, this little gem is a good place to start.  You might also check out Little Leaders: Visionary Women Around the World.  That’s where I’m headed next…I’ll keep you posted.

For the Sensitive Reader:  All clear.

Back to Top
Close
close
Go to mobile version